Sugar and spice, but not necessarily nice.

So, those who actually watched through the videos in the last post, you know what this is about. I'm basically making a format for me to be more active in this blog by featuring an album of choice for the month and a theme to make coordinate ideas over, as well as a monthly big post, illustrated as usual, and a vlog post. Any events will be reported on, as well, mainly meet-ups and/or cons I go to, as well as personal outings that could inspire a meet. I'm also going to do a seasonal wishlist of what's going on with brands and possibly a monthly off brand look out, though this month won't have it as I think I really ought to do that at the start of the month and it's already the 11th.

Anyhow, with the albums, I'm going to now change up the playlist on the side to feature songs from that album, as well as some other songs to go with the theme, so have a listen! I'm making it a mixed playlist still, because 1) I find it more interesting that way and 2) you can go buy/download it yourself.

So, the album this month is No Doubt's Return of Saturn. This album is big for me, 'cause it's the first new album I bought in 2000, and the end of the '90s was a big deal for me; I had just become a teenager and the real figuring out of what I was and wanted to do started. Return of Saturn was fitting 'cause it kinda themed around the feel of figuring out everything as life changes, more than the big break up focus of Tragic Kingdom. Also, it was the last album of No Doubt's that I like over all (Rock Steady didn't quite do it for me). Overall, it just has this awesome appeal of being melancholy but also bright, poppy and girlish.

The playlist for the month in full is:

So, here's a coordinate based on the album art: 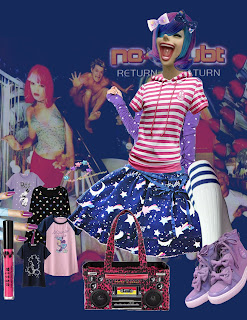 Yeah, those were the days of bright pink-haired Gwen. Like the playlist, this is the sweetest/poppiest thing I've coordinated for lolita. I desperately covet Dream Sky in navy and it's the first thing I thought of when I decided to make Saturn the featured album. I pulled out the deeper pink and lavender from the print and threw in a bit of sporty/skater punk influences with the rest of the coordination.

As for the over all theme for the month, I've settled on space-based sci-fi and fandom with lolita. Largely because I'm watching Doctor Who and not getting down from my Otakon high still. So, nerdy lolitas: this is for you.